Grace Methodist Austin DISCOVER THE ART OF PUBLISHING
Home Us church After nearly half a century, Mormon Washington Temple reopens to public

KENSINGTON, United States (AFP) — Like something out of a science fiction novel, with its six golden spiers and pristine white walls rising above the surrounding trees, the Mormon Temple in Washington DC has been intriguing for decades people denied access.

Their curiosity will soon be satisfied, however, since for the first time in almost half a century, the temple will open its doors to the general public this month.

The building, one of the most mysterious in the U.S. capital, is usually only open to members of The Church of Jesus Christ of Latter-day Saints, for whom family, chastity, and missionary work are central values.

“People feel like what we’re doing inside is a secret, but as you saw today, it’s just sacred. It’s very sacred to us,” he told AFP Kevin Duncan, senior Church official.

At a media open house on Monday, the temple welcomed nonmembers for the first time since its 1974 dedication.

Visitors had to put on white slippers to see the plush, luxurious interior with its immaculate thick carpets and golden surfaces.

A wall shows depictions of the apostles inside the Visitor Center of The Church of Jesus Christ of Latter-day Saints in Kensington, Maryland, near Washington, DC on a rare open house, April 18, 2022. (Eva Hambach/AFP)

The last time the public was allowed to cross the threshold, 750,000 people, according to the Church, had thronged the site in Kensington, Maryland, a few miles outside Washington proper. Among them was then First Lady Betty Ford.

The temple closed in 2018 for renovations and was due to reopen in 2020, before the COVID-19 pandemic disrupted the schedule.

Baptisms for the dead

Future visitors should book free tickets to enter the site from late April to early June.

Inside they can experience the rituals of the Church, where as soon as members enter what they consider to be one of Earth’s holiest places, they shed their street clothes to dress in white.

“It’s a reset. A symbol of equality, of purity,” said David Bednar, one of the Church’s 12 Apostles, who came from Utah for the occasion.

The curious can also visit the baptistery, where a small basin is mounted on the backs of 12 life-size white marble bulls representing the 12 tribes of Israel.

In the Mormon faith, baptism by immersion inside the temple is reserved for the dead. 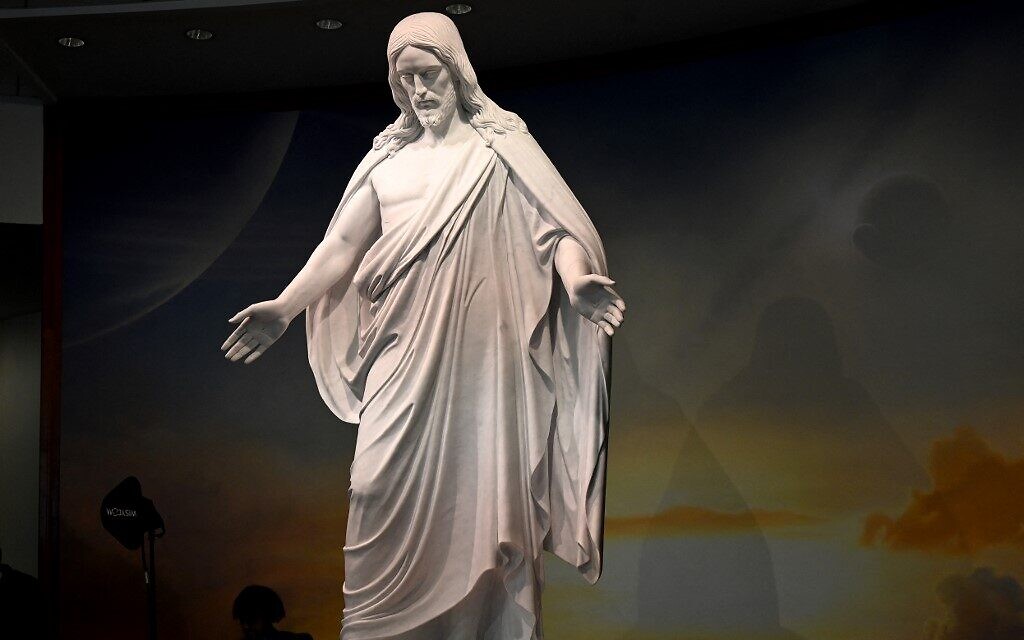 A statue of Jesus Christ is seen inside the Visitor Center of The Church of Jesus Christ of Latter-day Saints in Kensington, Maryland, near Washington, DC on a rare open house , April 18, 2022. (Eva Hambach/AFP)

The church allows its flock to be baptized in the name of their ancestors, and it is then up to the souls of the departed – if they exist, and the church firmly believes that they do – whether or not to accept the “gift”. “.

Among other spaces in the sprawling temple is the “Sealing Hall,” where marriages are performed (or “sealed”) around a white marble altar covered in beige velvet.

Unions are exclusively between a man and a woman and are deemed to last not just for a lifetime but until death, because “the family is essential to the plan of the Father,” Bednar said.

Family ties between parents and children can also be “sealed” for eternity during a ceremony in these same halls.

The Church says it expects to welcome several hundred thousand visitors during its open house period.

We tell a critical story

Israel is now a much bigger player on the world stage than its size suggests. As a diplomatic correspondent for The Times of Israel, I am well aware that Israel’s security, strategy and national interests are always under scrutiny and have serious implications.

It takes poise, determination, and knowledge to accurately convey the story of Israel, and I come to work every day aiming to do just that.

Financial support from readers like you allows me to travel to witness both the war (I have just returned from a report in Ukraine) and the signing of historic agreements. And it keeps The Times of Israel the place readers around the world turn to for accurate information about Israel’s relationship with the world.

If it’s important to you that independent, factual coverage of Israel’s role in the world exists and thrives, I urge you to support our work. Will you join the Times of Israel community today?

yes i will give

yes i will give

Already a member? Log in to stop seeing this

You are a dedicated reader

We’re really glad you read X Articles from The Times of Israel over the past month.

That’s why we started The Times of Israel ten years ago – to provide discerning readers like you with must-read coverage of Israel and the Jewish world.

So now we have a request. Unlike other media, we don’t have a paywall in place. But since the journalism we do is expensive, we invite readers to whom The Times of Israel has become important to help support our work by joining The Times of Israel community.

For just $6 a month, you can help support our quality journalism while benefiting from The Times of Israel WITHOUT ADVERTISINGas well as access Exclusive Content only available to members of the Times of Israel community.

Thanks,
David Horovitz, founding editor of The Times of Israel

Already a member? Log in to stop seeing this