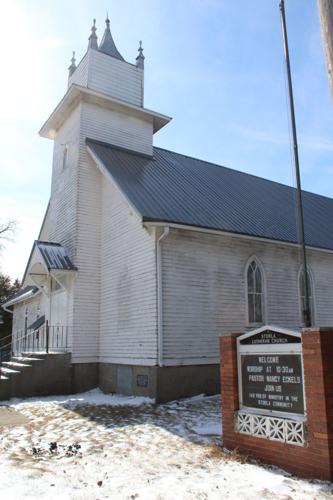 The Storla Lutheran building in the Aurora County community dates from 1929. The church will celebrate 140 years as a congregation this summer.

At first there were two.

Since the 1880s, Lutherans near the village of Storla, South Dakota, west of Mitchell, have supported two churches. They participated in youth rallies and summer picnics. They also shared in the tragedy, when both church buildings were knocked down in a great summer storm in 1924. They each rebuilt and continued their work for another 90 years.

Today, only one church remains. Knowing how far they have come – through windstorms, economic hardship, world wars and declining rural populations – members are preparing to celebrate 140 years of history at Storla Lutheran Church this summer.

“Those are our roots,” said Mary Fristad.

Scott’s family are among those who founded the church on April 7, 1882. His father grew up in Storla Lutheran while his mother’s family were members of the now defunct sister church, Trinity, which was five kilometers to the east.

“The boys from Storla were going to rob the girls from Trinity,” he said.

Storla Church was originally located just north of the village of Storla at the place known as Jensen corner. The church moved closer to the thriving community center in 1924. It was two weeks after the move, on June 14, that a storm blew up, destroying both this building and Trinity Church.

The wood was salvaged and used to build a presbytery, which still stands next door. One of the few items saved from the disaster was a large altar depicting Jesus as a shepherd leading a flock of sheep and carrying a small lamb in his arms, a gift from the Andrew Jensen family.

Decades later, this long treasured focal point of the church has also been lost. A fire broke out on May 18, 1980, the day Mount Saint Helens erupted, and the painting was lost.

The congregation put a lot of thought into designing a new piece of art for the altar. Fristad’s husband, Eugene, spent many nights at their dining room table putting to work his drafting tools from his time at the South Dakota School of Mines, she said. The church commissioned Robert Aldren, at the time chairman of the art department at Augustana College in Sioux Falls, to turn it into a metal sculpture.

The sculpture is highly symbolic. The bottom of the triangle represents the trinity, as do the images inside: a hand for God the Father, a lamb for the Son of God, and a descending dove to represent the Holy Spirit. There are also symbols representing the sacraments of baptism and communion.

The members of Storla Lutheran have gone to great lengths to ensure that the mission of their church stands up to all the challenges that come their way. The women of the church have been especially dedicated in this regard.

The Ladies Aid Society was organized in 1888 with the mission of operating a parochial school. Classes met over the course of a month or two in member Andrew Jensen’s attic, and the teacher was paid $15.

Ladies Aid meetings lasted all day and the women came on foot, on horseback or in wagons. A lady traveled three miles carrying her child to attend, according to a story compiled for the state’s bicentennial celebration.

When the church building blew up, the women helped raise money for a new building by selling broody hens and serving lunch at local auctions. By 1928 enough money had been collected. Construction began this fall and the first service at the new Storla Lutheran Church was held on February 24, 1929, with the baptism of four babies.

The 1930s were difficult as harvests failed and the economy faltered. The minister’s salary was cut by a third and meetings of religious organizations were cut in half to save on mileage and fuel oil used to heat buildings.

As things rebounded, so did the Ladies Aid Society, which became well known for its Lutefisk suppers. In 1945 they were so popular that they served 800 people.

“The ladies worked so hard boiling lutefisk on that old stove,” said Norma Fristad, who, at 95, is the church’s oldest member. She didn’t like lutefisk, she said, but all the accompaniments were delicious.

From the start, Ladies Aid was a big part of the social life of women in the church. Fristad remembers her first encounter with the group as a 22-year-old bride and felt she might not be cut out for it.

A large group of ladies showed up for the meeting and the host was to serve a full lunch – mashed potatoes, chicken and pie, she said.

“I thought, ‘I will never join this organization because I can’t do this,'” she said. “But then it’s just dessert, which kind of burned the older ladies.”

Fristad really liked the quilting group, and she’s still there. At first, the quilters met in the church basement twice a week, taking breaks for coffee, homemade donuts, and a potluck. While they sewed, older ladies worked in the kitchen cooking, cleaning, and polishing silverware.

“It was a big event,” Fristad said. “They had fun in the kitchen and we had fun here.”

Even though it’s now just her and a friend who make them today, they still managed to send 47 quilts to Lutheran World Relief last year. Fristad also makes quilts for baptisms and high school graduations. For graduates, church members each design a square to embroider and sew into creation.

“It makes for a pretty colorful quilt,” Fristad said.

Although some families have moved away from the area, many women continue the active church life with which they grew up in Storla Lutheran.

“We left a legacy for our daughters,” said Margene Thompson, who used to bring her youngest daughter to circle and cleanup days, and she remains a good example today, as president of the synod-wide women’s organization, WELCA.

It’s a way for Storla to be active in the larger community, said Pastor Nancy Eckels. They also reached out to help a companion church in Cameroon. A framed photo in the shrine shows the roof they helped put on the African Church building. Eckels finds this special for such a small church.

“I think it takes real commitment,” she said.

In the past, there were three Storla Women’s Circles, couples clubs for young and old, and monthly family nights with games and dinner.

Sunday school was once nicknamed “the penny school” because of the offering the children brought tied in their handkerchiefs. Norma Fristad taught a kindergarten class of 13 little Lutherans, including Brett Selland who has now unofficially accepted the position of Church Historian.

He remembers the days of an active Junior Mission Society and Luther League who enjoyed camping trips in the Black Hills and Rockies. An annual summer softball game at Trinity Church was a favorite.

“It was the highlight of the summer meetings,” said Mary Fristad.

She and her husband worked the land around Trinity, and the pastor was always worried about whether the hay would be put in place in time to clear the field for the softball game.

Storla Lutheran continued without its sister church. Trinity closed in 2015 and the building burned down. A metal monument stands in its place, and the common churchyard is across the street.

A live stream of the service launched during the COVID-19 shutdowns continues today and is attracting many followers from outside the region.

Members today are ready to celebrate how far we’ve come and honor the past with a celebration on July 10th. There are plans for morning worship with Bishop Constanze Hagmaier, a midday meal, and an afternoon of sightseeing and remembrance.

“I think they have much to be proud of,” said Pastor Eckels, who has served the church since his ordination in 2018 and before that in his formal internship. “They’ve done a lot in those 140 years and they’ve been faithful.”

Prayers on the Prairie is a regular feature of the Tri-State Neighbor, replacing the Crop Watchers report during the winter season. If you have a suggestion for a rural church to feature here, contact Editor-in-Chief Janelle Atyeo at [email protected]

Get the latest agriculture news delivered to your inbox from the tri-state neighbor.