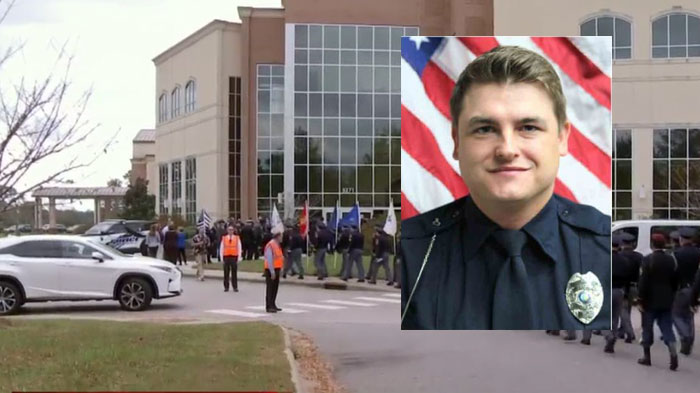 KNIGHTDALE, NC (WNCN) – Ryan Hayworth, the Knightdale police officer who tragically lost his life in the line of duty on Sunday, was recalled by family, friends and surrounding police on Friday after- midday.

American flags lined the streets, along with fire trucks, police cars and hundreds of cars. A procession to and from the Elevation Baptist Church took place along US 64.

GoFundMe started for Knightdale officer killed in I-540 crash

Police said the roads will be closed from 2:30 p.m. to 6:00 p.m., but times may vary. And, with all the tributes throughout Hayworth’s service, the word of warning may be needed.

Hayworth was a third generation officer training Sunday morning when he was killed. His father, a retired police chief from Zebulon, and his brother honored his service and spoke to the community that made his dream come true.

“He always wanted to be a cop. Thank you for letting him live his dream, ”said Adam Hayworth. “(Even) for as little time as he’s had on this planet.”

Their father shared a letter, expressing his “heartfelt thanks” to the Knightdale Police Department for helping train his son and for reaching out and helping during the final week of the tragic event.

Tim Hayworth wrote how honored his son would be to remember this way and see the whole process Knightdale police, surrounding forces and the community go through to honor him.

In addition, the whole church fell silent when Cody Hagler arrived in a wheelchair. He was Hayworth’s training officer. He survived Sunday’s crash. He was able to be present, despite the long road to recovery that awaited him.

After the church service, a private funeral for family and close friends will take place at the Gethsemane Memorial Gardens in Zebulon.

The family have asked the public to respect private service, but still encourage anyone who wishes to participate in the procession to join the procession. It will take place from US 64 Business at Leith Auto Park to NC 97 light.