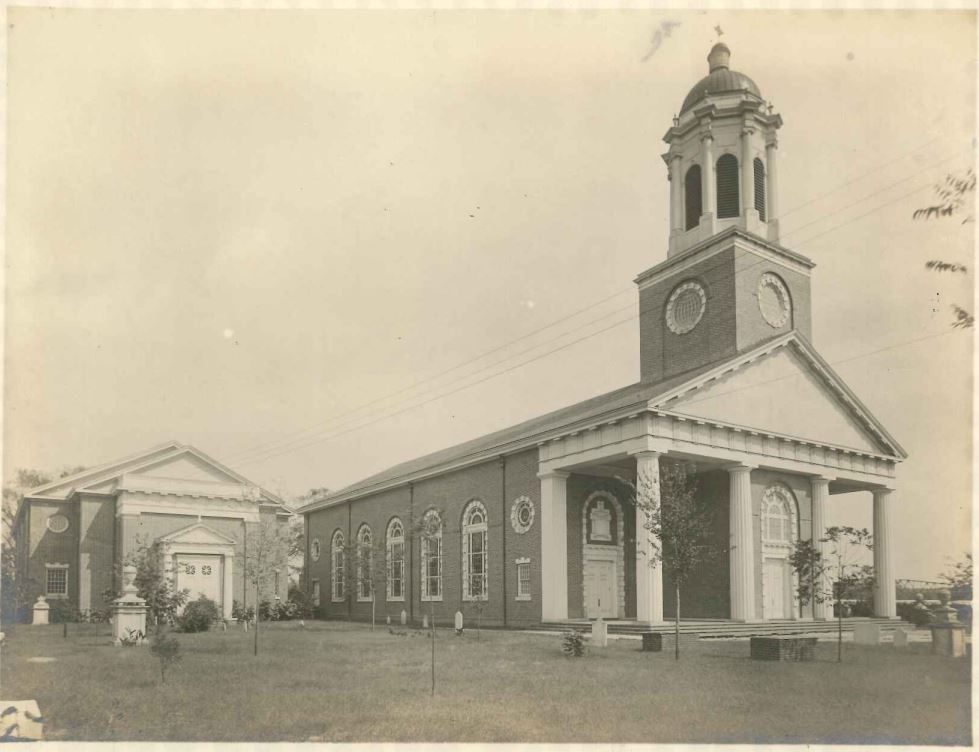 AUGUSTA, GA (WJBF)- Spring is here and Easter, one of the biggest Christian holidays of the year, is on Sunday. In this month’s Hometown story, Kim Vickers walks through the oldest church in Augusta.

The church is older than the United States. St. Paul’s Church was founded in 1749, more than 25 years before the signing of the Declaration of Independence. It is listed on the National Register of Historic Churches.

Close your eyes and imagine what Augusta must have looked like back then. A very small town. Lots of towering trees. A great flowing river. And a little church on the corner of what was then known as Fort Augusta.

“I think what stands out in the history of St. Paul’s is the long devotion from generation to generation,” said Reverend Eric Biddy, the new rector of St. Paul’s Church.

St. Paul’s Church has a fascinating history. It has survived a lot, including several wars and the great fire of Augusta in 1916.

There were 5 buildings since its debut. The colonial church was the first.

Historian Erick Montgomery explained that when Augusta was founded in 1735, the settlers held their own prayer services. Eventually they decided they needed a real church.

“But they started bringing in women and having children and they thought there must be a more civilizing influence in nature and wool…it was the wild, wild west,” Montgomery laughed.

Two years after the settlers asked for a priest, Father Jonathan Copp arrived. When he arrived in Augusta, he brought a gift from the Church of England. Marble baptismal font which is still on display in the church today. Montgomery said Copp was not a fan of the colony and left 5 years after arriving.

“Jonathan Copp hated Augusta with a passion, for he was not accustomed to the wild and woolly regions. He thought he was going to be killed at any moment, either by the Indians or the settlers, one or the other. .

The colonial church was destroyed by refugee vandals in 1762. A new building was constructed in 1764, but was destroyed during the American Revolution in 1781. In 1789 a third church was built and was used until 1819.

“When that building was moved to Broad Street and turned into a store. And they built the brick church that we call the 1820 church on the site,” Montgomery said.

The brick building stood until March 1916, when it was destroyed by the Great Augusta Fire. A story about fire is that the bell rings until the fire consumes it.

“The sexton was ringing the bell on the rope, pulling the rope, hoping people would come to help and try to save the church,” Montgomery said. “And eventually the rope burned and the bell stopped, and then shortly after that the steeple came down. It came down in the church and it was all over.”

Before the church building caught fire, they held a service to pray that the fire would not reach them. When it became apparent that this would be the case, they began removing important items.

Father Biddy claims that the quick thinking of people in the church is why they have some of the artifacts they have today.

“There are stories of members and the priest rushing into the burning church to save holy things. To release as many things as possible,” he said.

The church grounds are home to Augusta’s oldest cemetery with graves dating to the 1730s. Augusta.

The American Civil War again brought war to Augusta. When Georgia seceded from the Union in 1861, Bishop Leonidas Polk called for a meeting of all the Episcopal dioceses in the Confederacy. In 1862, the first General Council of the Episcopal Church of the Confederate States met at St. Paul’s Church.

After the war, St. Paul’s joined the Episcopal Church in the United States. Bishop Polk was buried under the current altar after his death in 1864. His remains were moved to New Orleans in 1945.

Many famous people are buried in St. Paul’s, including Colonel Ambrose Gordon, grandfather of Juliet Gordon Lowe, who founded the Girl Scouts. The remains of Colonel William Few, one of Georgia’s signatories to the Constitution, rest in St. Paul’s.

Perhaps most interesting, the remains of a man named Robert Forsyth.

“The one to my left is Robert Forsyth who was a federal marshal. And he was the first Federal Marshal to be killed in the line of duty in the United States,” Montgomery said.

An urban legend is also associated with one of the graves in the cemetery.

“The myth about it is that there was an Indian chief buried on his horse, sitting on his horse under that stone. School kids loved coming to see that,” Montgomery laughed.

Kim Vickers: “Do you have any idea how this rumor started?”

Montgomery: “Nothing to say. You know, I have to dispel a lot of rumors in Augusta’s history that I don’t know how they started. But I don’t know this one. It sounded like a good story and someone made it up to entertain their kids probably.

The grave actually belongs to Joseph Ashton, a mason, fire master and innkeeper. The marker which is now mostly brick, was once covered in stucco with Masonic symbols, but most are now gone.

Judge Ashley Wright grew up in this church. She says she has very fond memories of her childhood there.

“We used to take coins out and put them on the train tracks when we were done at the end of time. And we would climb the levy and slide down to the river and get dirty and get in trouble,” Wright smiles.

There’s been some conflict in the church recently over some of its Confederate history, but Wright said there’s one thing that helps them get over it.

“People here are all trying to live by the will and word of God and none of us are perfect. And that we may have made mistakes in the past, but we are here to try to do better every day.

Kim Vickers had a very important question for Montgomery and Wright.

Kim: “Are there any ghosts?”
Montgomery: “You know, I do historic preservation and I’ve been to millions…well, not millions, but thousands of historic buildings and I never see ghosts. I don’t know, some people say they see ghosts.

Kim “Do you have ghosts?”
Wright: “I wish we did. I don’t know of any. But I would love for us to do it. I think it would be very interesting and I think it would hopefully be a good spirit.

With all this history, you would think there would be ghost stories.

Wright said St. Paul’s Church is Augusta’s church. The doors are open during the day most days for those seeking a place of reflection and prayer. The courts are also always open to these people.

Wright said everyone is also welcome to attend church services. You can find the church schedule HERE.

CLICK HERE for information on Holy Week and the Easter service.

There is so much more to learn about St. Paul’s Church and for those interested, a full timeline and walking tour is available on the Church website.

Hometown History airs the second Thursday of each month.

Learn about the history of your hometown.