Dina Samodarov is one of them. Over the past week, she has been on the phone nonstop, taking calls from church members wanting to help beleaguered Ukrainians and delivering donations to missionaries on the ground.

“I was emotionally crying inside,” Samodarov said, watching her nephews at her home in Auburn, “because the whole country and her friends there [are] innocent people who die for no reason.

Samodarov and his family came to the United States as refugees in 1999, due to the religious persecution his family suffered under the Soviet Union.

Now, she and many other Christians in the Sacramento area are at the forefront of the war support effort – raising funds, organizing political and religious events, and even returning to the war zone.

Sacramento has one of the largest communities of recent Ukrainian immigrants in the United States, according to a 2020 census analysis by the Population Studies Center at the University of Michigan.

More than 16,000 Ukrainian-born immigrants have come to the Sacramento metro area since the fall of the Soviet Union in 1991, according to their analysis, more than to any area outside of New York, Chicago and Seattle.

But members of Sacramento’s Ukrainian community say the number of people in their diaspora is much larger — up to 100,000 — and many attend dozens of Slavic churches in the area, such as Spring of Life in Orangevale. or the First Ukrainian Baptist Church in Roseville.

Last week, Vadim Dashkevych, pastor at Spring of Life Church, co-hosted a large rally near the Sacramento Capitol and a prayer breakfast for dozens of Ukrainians, church leaders and politicians. Then he flew to the Polish border with Ukraine to make contact with humanitarian missionaries.

“God has done a great job in very difficult situations,” Dashkevych said. “Prayer is [the] the most powerful weapon we can have in the world.

According to Vlad Skots, there have been three waves of immigration from Ukraine, with the third beginning around 1990. The most recent was when most Ukrainians started coming to Sacramento, he said.

“The United States opened a special program for them,” Skots said. “In this case, there were many Christian families because they were persecuted there by the communist regime.”

Indeed, according to the Migration Policy Institute, many Ukrainians were able to emigrate to the United States thanks to the Lautenberg Amendment, which from 1990 created a pathway for those persecuted under the USSR.

Under Soviet Russia, people of any religious tradition, including Christianity and Judaism, could be taken to prison for practicing their beliefs.

“Especially during the Stalin years, many churches and synagogues were destroyed,” said Jeanne Batalova, senior political analyst at the Institute. “So people who wanted to practice their religion, they did it underground.”

The Lautenberg Amendment was available to any persecuted religious person, but evangelical Christians in particular took advantage of it to come to the United States, Batalova said.

California was a destination for Ukrainian immigrants, Skots said, because it’s “beautiful” and Sacramento isn’t as expensive as Los Angeles and San Francisco. 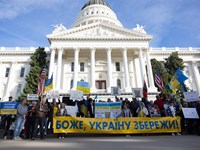 Lubow Jowa, president of the Ukrainian Heritage Club of Northern California, said there was another force drawing Ukrainians to the area: a Christian pastor.

“He had outreach work with these people who were trying to migrate,” Jowa said. “He invited them to come to his church here in Sacramento… [and] they turned to a man who offered them help.

Jowa says that because most Ukrainians who came to the Sacramento area were religious, they have “very strong beliefs,” which lean toward traditional values ​​and can align with the Republican party. But the younger or less religious of the Ukrainian diaspora may no longer have conservative values, according to Jowa.

Sixty-seven-year-old Nadia Vavrynyuk also emigrated as a refugee from Ukraine due to the religious persecution she suffered under Soviet rule.

Her son is now a pastor at the First Ukrainian Baptist Church in Sacramento, which also raises funds for the humanitarian effort in Ukraine.

Growing up in Ukraine, Vavrynyuk says fellow Christians had to worship in private places like “the woods” or in a private home to avoid fines or prosecution. Her father, who was also a pastor, was imprisoned for 10 years as a youth for being a Christian and refusing to fight for the Russians, she said.

“They wouldn’t allow me to go any further in work or school because I wouldn’t put my beliefs aside,” Vavrynyuk said through an interpreter. Because she had no access to higher education or job opportunities, she worked in a factory and worked many night shifts.

Although she arrived in the United States in 2002, more than 10 years after the fall of the Soviet Union, Vavrynyuk says she wanted to leave behind a legacy of Soviet-era political leadership in Ukraine.

“The communists never really left, and we didn’t know whether the country would follow them or not or whether it was going to change,” Vavrynyuk said.

Her late husband’s family and close friends are still in Ukraine, and she said she has been on the phone with them constantly since the Russian invasion.

“I hear them crying, I cry with them,” Vavrynyuk said, holding back tears. “The situation absolutely does not leave my mind.” 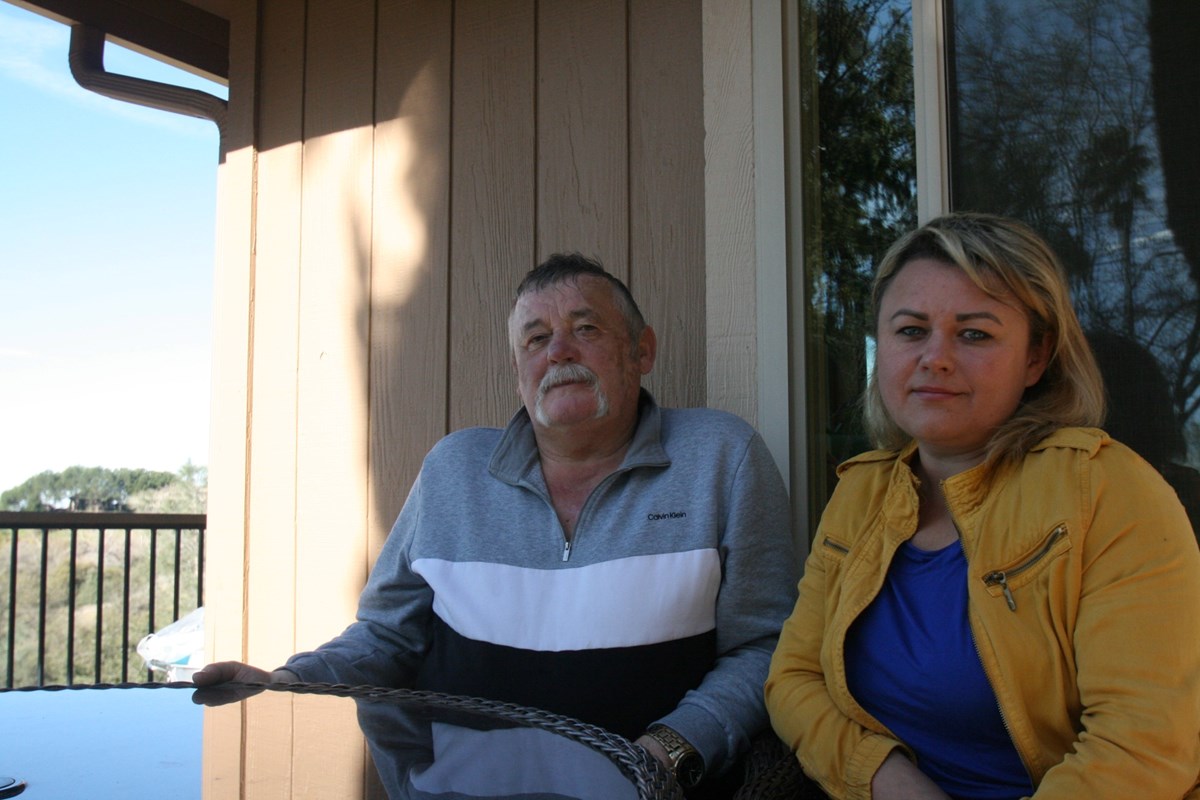 Volodymyr Androshchuk, 65, with his daughter, Dina Samodarov, just before boarding a plane to Poland in an attempt to cross into war-torn Ukraine to save his grandson and help with humanitarian efforts.Pauline Bartolone / CapRadio

Dina Samodarov didn’t just have the stress of being a translator, fundraiser, mother and babysitter to her nephews this week. She was also helping coordinate her parents’ trip to Poland, where they flew on Tuesday hoping to cross the Ukrainian border to rescue their two-year-old grandson.

“My nephew, we are planning to get him out of the war zone in Poland. And then we will apply for refugee status, maybe so we can bring him here,” Samodarov said.

Her father, Volodymyr Androshchuk, is 65 and has a prosthetic right leg. Despite the extreme risk, he plans to stay in Ukraine after rescuing his grandson to help other disabled people in the humanitarian crisis.

“I have to be there, where it’s very bad for people,” Androshchuk said.

“Wherever there is a need, or [it’s] difficult for people to breathe, like [a] Christian, I want to be there.

Samodarov will watch the war unfold in his homeland in the coming weeks and monitor the well-being of his parents, nephew and two brothers.

She said she was worried about her parents, who left their safety in the United States. But as she said: