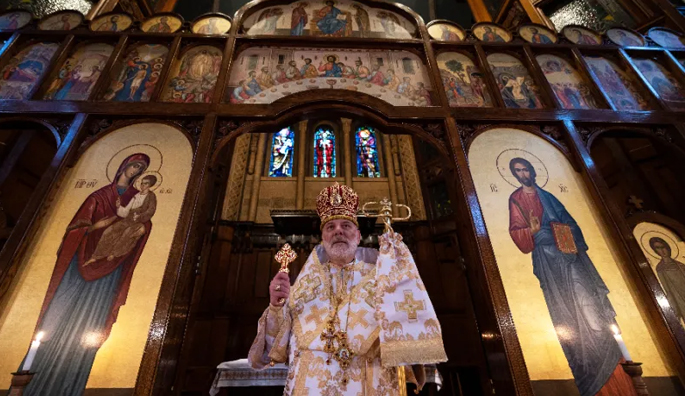 The Ukrainian Greek Catholic Church (UGCC) came to the world’s attention after Russia’s large-scale invasion of Ukraine in February. But many Western Catholics know little about the turbulent history of the largest of the 23 Eastern Catholic Churches in communion with Rome.

The year 1946 was a turning point for Ukrainian Greek Catholics. From March 8 to 10 of that year, a gathering known as the â€œLviv pseudo-synodâ€ took place. Under intense pressure from the Soviet authorities, the synod declared the UGCC to be under the jurisdiction of the Russian Orthodox Church.

Ukrainian Greek Catholics faced a stark choice: merge with the Moscow Patriarchate or face persecution. Almost all UGCC members have chosen persecution and many have left Ukraine.

The UGCC remained true to its identity between 1946 and 1981, the year Pope John Paul II promoted the first meeting of Ukrainian Greek Catholic bishops in Rome since the beginning of the Diaspora.

Spreading around the world, the UGCC has preserved the Ukrainian language and traditions, preserving the memory of its history.

So when the Soviet Union dissolved in 1989, it was ready to reestablish itself in its homeland. It has since become a key point of reference for Ukrainians around the world.

Communities from Australia to Argentina

Along with the other 22 Eastern Catholic Churches, the UGCC is sui iuris, or autonomous, but in full communion with the pope. It is headed by a major archbishop and has a synodal structure.

The historical roots of the UGCC are closely tied to Eastern Orthodoxy. It regards the Ecumenical Patriarchate of Constantinople as the mother Church and formally joined Rome in the Union of Brest in 1595. Today it has dozens of eparchies spread across four continents.

In addition to its Ukrainian territory, it now has archeparchies in Canada, the United States and Brazil, as well as an eparchy in Argentina and another in Australia, which are suffragans of the Latin Rite archdioceses of the city in which they are established. .

There is also an administration in Poland and eparchies in France and Britain, as well as one that includes Germany, Denmark, Norway and Sweden, and a recently established exarchate in Italy.

The Church takes the pastoral care of its members around the world seriously: in 2020, a Bishop was appointed to work full-time with the UGCC Migration Ministry office.

All this is the legacy of Metropolitan Andrey Sheptytsky. He led the UGCC from 1901 to 1944, through two wars, the Communist revolution and Soviet repression.

When Sheptytsky began his tenure, the UGCC had only three eparchies in western Ukraine under the rule of the Austro-Hungarian Empire. Sheptytsky was the first to take pastoral trips to visit the faithful in all parts of the globe, doing everything necessary to send priests and bishops to care for them.

He visited Russia in 1907 and 1912, as well as Belarus. He creates an apostolic vicariate in Bosnia. In 1907 he was appointed bishop of the Greek Catholic Church in the United States, and in 1912 he was called to care for the Ukrainian community in Canada.

Sheptytsky used popular language and made himself understood. It also granted scholarships to young Ukrainian artists so that they could be trained in the best European institutions.

Between the two world wars, Sheptytsky worked to develop the UGCC. On his initiative, the Greek-Catholic Theological Academy in Lviv was founded in the late 1920s.

During the Second World War, Sheptytsky raises the problem of the union of all Ukrainian Christians around the patriarchate of kyiv and in continuity with Rome. Accordingly, he called the first meeting of Ukrainian Greek Catholic bishops in Rome in 1929.

It is no coincidence that Ukrainian Greek Catholics dream of the canonization of Metropolitan Sheptytsky. His beatification process began and his heroic virtues were recognized in 2015.

His beatification would be a symbolic gesture of recognition for a Church that suffered in silence during the war and then emerged from the catacombs.

When she appeared, she initially faced a lot of hostility and struggled to get her churches back, which were confiscated under the Stalinist regime.

If today the UGCC is global, it is also partly thanks to the publication of â€œChrist â€“ Our Easterâ€, a catechism specifically created for Ukrainian Greek Catholics. The catechism was innovative because it did not simply adapt the texts of Latin Rite catechisms â€“ a practice which, according to UGCC Major Archbishop Sviatoslav Shevchuk, created “doctrinal Latinization”.

“Christ – Our Passover” is an original catechism in which the primacy of Peter is confessed in an oriental way, according to, in the words of Shevchuk, “the Byzantine vision of the catholicity of the Church as a communion of local Churches, guaranteed and promoted by the Successor of Peter as a visible bulwark and supreme servant of the universal communion of the Church of Christ.

In 2019, the bishops of the UGCC decided to survey the faithful around the world to understand what binds them to the Ukrainian Greek Catholic Church. The vast majority said they identify with Eastern spirituality and the tradition of the Kyiv Church.

This observation prompted Shevchuk to say: “It is no longer the nation and the language that are the foundation of the Ukrainian Greek Catholic Church, but the experience of the incarnation of the word of God in the flesh and history of the community of our Church.”

Create a common front in Ukraine

Although it is now a worldwide church sui iuris, the UGCC maintains a distinct national structure. In recent years, even during the “Revolution of Dignity” in 2014, he tried to strengthen the identity and spirit of the Ukrainian nation.

The UGCC did not focus on minority rights â€“ as one would expect in a predominantly Eastern Orthodox country. On the contrary, he stressed the importance of strengthening Ukraine as a just and multi-ethnic state. He worked closely with the Ukrainian Council of Churches and Religious Organizations (UCCRO), with the aim of creating a common front to help people beyond their religious affiliation.

The UGCC is based in a country that has seen the worst of 20th century European trauma and has been in constant conflict with Russia since 2014. But some precedents may bode well for its future. And here again, we must return to John Paul II.

A model of reconciliation

The Polish Pope promoted the first meeting of representatives of the Polish episcopate and the Ukrainian Greek Catholic Church, which was held in Rome in 1987.

This was the last of the great reconciliations after World War II. First, there was the reconciliation between French and Germans. Then between Germans and Poles, promoted by Cardinal BolesÅ‚aw Kominek. And finally, between the Ukrainian Greek Catholic Church and the Polish Church.

Two episodes led to the need for reconciliation. The first was the ethnic cleansing of Poles by Ukrainian nationalists in Volyn (also known as Volhynia) in 1943. The nationalists were supported by the local population. Russians, Jews, Armenians, Czechs and other minorities were also victims of the massacre.

The second was Operation Vistula: the 1947 deportation of more than 200,000 Ukrainians residing within Poland’s new southeastern borders. The official objective of the operation, carried out by the Polish communist government with the help of the Soviet Union and Czechoslovakia, was the suppression of the Ukrainian Insurgent Army (UPA). The massacre of Polish civilians in the southeastern territories was attributed to the UPA.

The 1987 meeting in Rome focused on these episodes. Representatives of the UGCC were present, although the Church was in diaspora after the Lviv pseudo-synod, as it was considered the most vivid representation of Ukrainian sensibilities and history.

It may be the fate of the UGCC to embark on a path of reconciliation when the war is over. But he will have to do so as a bridge between East and West, perhaps seeking contact with the Moscow Patriarchate and overcoming the divisions that led to the Orthodox schism and the creation of the Orthodox Church of Ukraine. .

Like all sui iuris Churches, the UGCC remains a profoundly national Church. However, its totality is so universal that it has parishes abroad where first-generation Ukrainian immigrants are no longer the majority, which can be an essential asset on the road to peace. This is the challenge it will face in the future.

If you enjoy the news and views provided by Catholic World Report, please consider making a donation to support our efforts. Your contribution will help us continue to make CWR available to all readers around the world for free, without subscription. Thank you for your generosity!