USCCB, Project Rachel will use 13 videos to raise awareness of post-abortion healing ministry 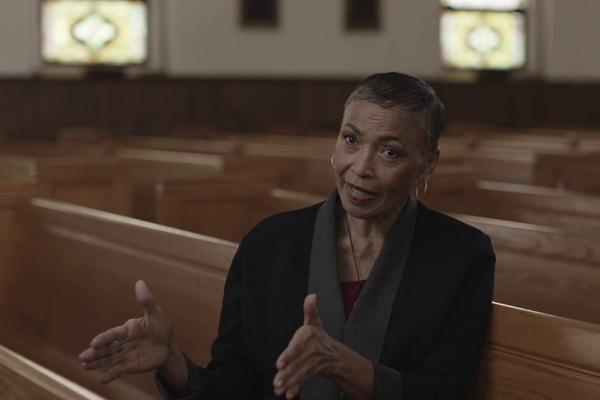 Helen Evans of Little Rock is seen in a Project Rachel ministry video recorded in Washington, DC, in October by the United States Conference of Catholic Bishops. She was one of four women chosen to share her abortion healing story for national videos.

Helen Evans of Little Rock is seen in a Project Rachel ministry video recorded in Washington, DC, in October by the United States Conference of Catholic Bishops. She was one of four women chosen to share her abortion healing story for national videos.

Helen Evans, a longtime volunteer and former Rachel Project Coordinator for the Diocese of Little Rock, was one of four women chosen to share her story in a national video. She said she found hope and healing through the ministry about 20 years after her abortion in 1979.

“God was so merciful, look what he did: he healed me. I am released. And we’re going to share our story,” said the 70-year-old parishioner of Our Lady of Good Counsel Church in Little Rock. “That’s what we’re supposed to do, love and serve the Lord. That’s one way to do it and thank God.

Thirteen USCCB videos, with Evans featured in several, are freely available to dioceses that have Project Rachel ministries. For a cost, the videos are also customizable, allowing departments to put their confidential direct contacts for their departments in the video.

“I want people to know that Jesus is the healer…that God loves us,” Evans said.

The diocesan office of Respect Life, which oversees the ministry of Project Rachel, will have five personalized videos in English and Spanish for $800, thanks to donations, said Catherine Phillips, director of Respect Life.

The videos, which include interviews with women who have had abortions and with priests, can be used in multiple ways, including on the diocese’s website, dolr.org, and in clips on social media.

“It was a collaborative process that spanned many years,” Phillips said.

Last summer, she and other directors across the country were asked by Mary McClusky, assistant director of the Rachel Ministry Development Project for USCCB, to recommend women “who could share their stories with hope, but with humility. also, and for me, I’ve known Helen for many years now, I met her through the Rachel project and she does it so well.

Evans traveled to Washington DC in October to record the footage at St. Theresa of Avila Church.

“I want people to know that Jesus is the healer…that God loves us,” Evans said, adding that she was “trapped in this shame” for about 20 years.

On the day of her abortion, she remembers saying, “I killed my baby.

“How long can you live with this kind of secrecy?” and while she promoted the idea of ​​”my body, my choice” at the time, “it was just me trying to appease my conscience.”

Her courage to share her story again, this time nationally, goes back to seeing a woman named Mary speak about her abortion at a healing conference in Arkansas circa 1998.

She saw a Project Rachel ministry pamphlet about a week later and attended a retreat. It changed his life.

While the videos don’t state that Evans is from Arkansas, it speaks to the quality of Project Rachel’s ministry in the state.

“I am so proud of Helen, so proud of our ministry and so proud of our diocese and the foundation that Anne (Dierks, who founded the diocese’s Rachel project) laid and has continued all these years. … We are blessed,” Phillips said.

The ministry has expanded and continues to have a multifaceted approach, with healing days, retreats, Bible studies, support groups (see box), but above all accompaniment for any woman or man (speaking English or Spanish) who was injured by an abortion. Calls and texts are answered on a confidential direct line, (501) 663-0996.

“Having someone to be there for you, to listen to you, to walk with you, to point you to resources, prayers, scriptures, priests,” Phillips said.