A worshiper from St. Luke’s, Wamego, Kansas, turns to see who is joining the service via Zoom before worship begins on February 13, 2022. Photo: Eric Benson

[Episcopal News Service] Amid conversations about whether churches should abandon online worship options developed because of COVID-19 or keep them, a small church in the Diocese of Kansas discovered that its online presence had not only maintained its community together during the pandemic, but had also attracted new people, some of whom live hundreds of miles away. And in what could be a first for the Episcopal Church, the congregation has elected an online member to its sacristy.

When St. Luke’s Episcopal Church in Wamego, Kansas, suspended in-person worship in March 2020, its rector, the Reverend Casey Rohleder, worried that live streaming would not keep his parish community of 60 members connected. , she told Episcopal News Service. Instead, they gathered using Zoom, with each participant’s name and, if desired, an image, appearing in boxes on the screen. Rohleder said that to his surprise, “people started joining who weren’t our Sunday regulars in person.”

Among them were Denise Thornton and her husband, Mace, who live in the St. Louis suburb of Chesterfield, Missouri. They had been active at an Episcopal church in Virginia before Mace Thornton’s work took them to St. Louis in late 2019. Denise Thornton told ENS that at the start of the pandemic they tried to watch live worship streams, but felt the services lacked a sense of community. they had known.

Denise Thornton grew up Presbyterian in Wamego, and through a Facebook chat with a childhood friend who had started attending St. Luke’s, the couple also began worshiping there via Zoom. They loved it and became regulars, joining what has grown to a dozen online worshipers who make up about a third of the congregation’s average Sunday attendance. They also began paying tithing, attending Bible studies, discussing movies, and reading lessons during worship. In August 2021, the Thorntons made the 700-mile round trip to attend the funeral of a parishioner they had come to know and love. It was the only time they were inside the church building. 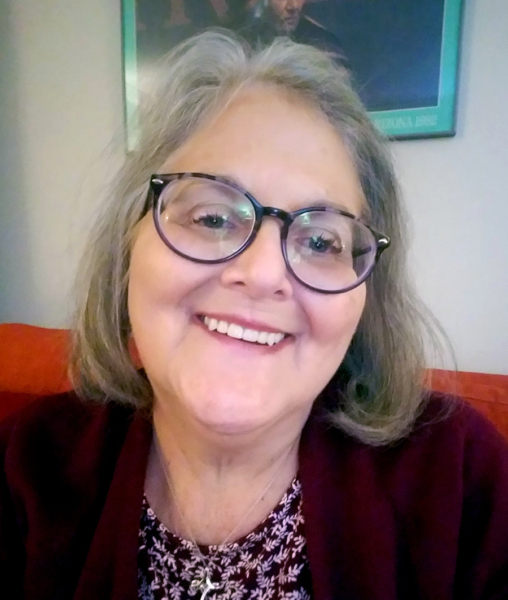 Denise Thornton, who lives in Chesterfield, Missouri, and participates in Sunday worship and other parish activities, was recently elected to St. Luke’s vestry. Photo: Courtesy of Denise Thornton

And for Denise Thornton, online worship not only provides a real sense of community; it also protects her. The medications she takes to manage rheumatoid arthritis weaken her immune system. “I have to be really, really careful,” she said. “Catching COVID would be a serious risk.

When St. Luke’s Sacristy began discussing who might have the leadership skills and spiritual formation to fill an upcoming vacancy, someone suggested Denise Thornton, and the members unanimously agreed, said Rohleder, who then checked the canons and consulted with Kansas Bishop Cathleen Bascom to see if anything prohibited Thornton’s election. Denise Thornton ran unchallenged and was elected to the vestry on February 6. His election “seemed groundbreaking,” Rohleder said.

As a member of the vestry, Thornton wants to watch over everyone in the church, but feels especially protective of the congregation online, “partly because of its importance in my life, but I see the importance that ‘she can have in many other lifetimes’. St. Luke’s online presence could be helpful to people like her who just can’t be in church, especially those with serious illnesses or who are in nursing homes, he said. she declared.

Even after St. Luke returned to full-time in-person worship in February 2021, the church worked hard to include Zoom parishioners like the Thorntons, Rohleder said. During services, the Zoom screen is projected onto the back wall of the nave, so that attendees can see and hear everything that happens and, just as importantly, can be seen by those in the pews and at the altar. Sometimes an online worshiper serves as a reader. During the passage of peace, some parishioners will pass in front of the camera to greet the online community. Even coffee time isn’t neglected, Rohleder said — the Zoom community is on a TV screen in the church hall with a table microphone and camera nearby, so those in person can chat with those in line.

When asked if they had discussed connecting with a church near them, Thornton said they had and decided against it. “We are very comfortable at St. Luke’s and with Mother Casey,” she says. “Maybe years later we might feel differently. Right now our needs are totally met with St. Luke’s.

Thornton appreciates the value of people being physically together, “but that’s not the end of it at all, because for some people that’s not an option.” she says. “Who said we only need to commune one way? What would Christ say? He met people not only in the temple, but on mountains and other places. Would he have preached on Zoom? He went where the people were. And many of us need to be on Zoom.

– Melodie Woerman is a freelance writer and former director of communications for the Episcopal Diocese of Kansas.