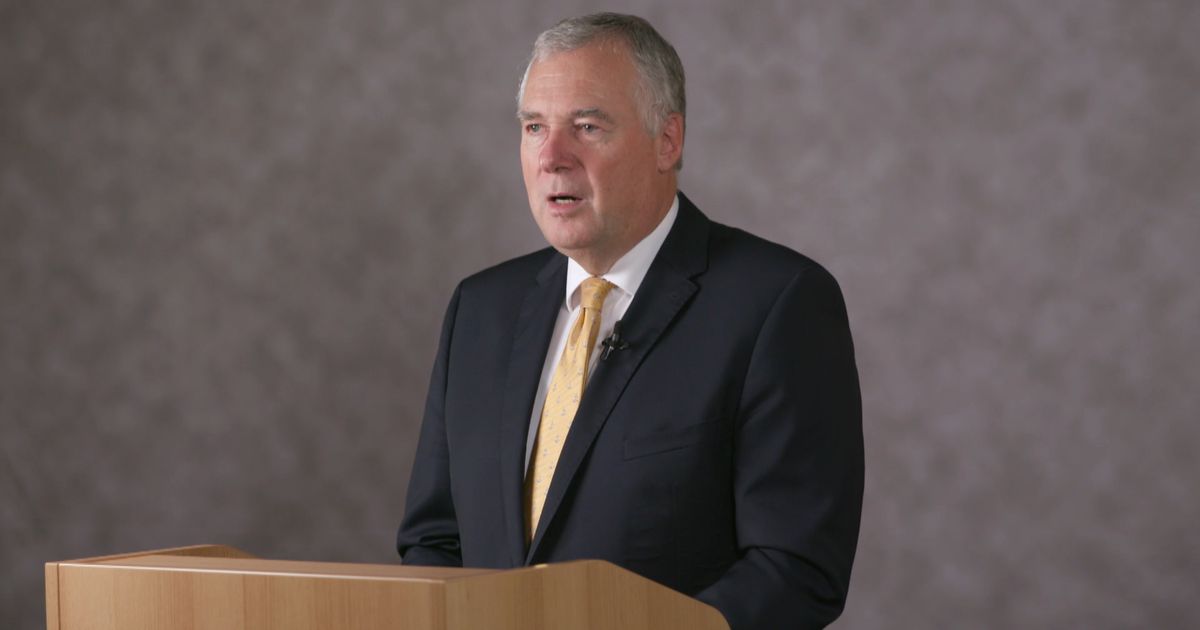 Brother Erich Kopischke’s frank General Conference address touched my stomach this weekend. He spoke candidly about his family’s struggles with a son who returned home from a Latter-day Saint mission early due to mental health issues. The son was seriously thinking about suicide.

In the presentation, Kopischke assured that many members of The Church of Jesus Christ of Latter-day Saints wanted to hear from the pulpit:

• “Challenges often indicate a need for additional tools and support and are not a character flaw. “

• “Focusing on growth is healthier than obsessing over our flaws.

• “Open and honest discussions with each other will help this important topic receive the attention it deserves. “

• “We need to love each other and be less judgmental, especially when our expectations are not immediately met. “

I am grateful that a general authority has had the courage to speak out about mental illness and the difficulty of finding hope.

It’s not something I’m used to discussing publicly, but I resonated on a personal level.

I have been caring for family members with mental health problems for three generations now, and I am frankly exhausted. It’s actually my dad’s birthday, so I think about it a lot. He would have been 82 today. He was an absolute bastard, yet I loved him; he was brilliant and hilarious, and he was my dad. He was also gravely mentally ill, and the damage he caused rippled through his children and grandchildren in ways that are still hard to forgive, more than a decade after his death.

For those of us struggling with mental illness, ours or those we love, church can be both a blessing and a hindrance. On the blessing side, the church teaches me to forgive freely, to love everyone, to extend the second and eighth and 77th chances. It emphasizes a gospel of hope and a better future. He teaches (which is important to me, and one of the reasons for my conversion to Mormonism as a young adult) that we are not responsible for the sins of our fathers.

And in recent years, the church, like the rest of society, has slowly begun to eliminate the stigma it once attached to mental illness. Apostle Jeffrey Holland and Relief Society leader Reyna Aburto discussed depression in General Conference, and as a people we are now unearthing the story of George Albert Smith ‘It’s years of treatment for serious mental and physical illness when he was an apostle a century ago. The church buried this story for years, making no mention of it in their “Teachings of Presidents of the Church” volume about him.

But the church was not the only one to cover up such things. Mental illness was simply shameful. The stigma has been too great.

On the obstacle side, however, the Church’s approach to the gospel often adds to my exhaustion. Kopischke’s direct and affectionate speech to General Conference is a balm for my soul, but it floats on a river of constant rhetoric about how humans are to “qualify” for exaltation, and how the ultimate approval of God is conditional on what we do (or don’t do). ) in this life. Even in that same General Conference, we had a discussion that no unclean thing can dwell with God in heaven, a warning that those who do not attend church risk losing blessings in this world. and in the other, and various reminders to improve ourselves.

If I had never had a loved one with a mental illness, I probably would never have questioned those ideas. (I’m one on the Enneagram, for heaven’s sake: we love things like self-improvement and predictable if-then patterns of behavior and consequences) But my encounters with mental illness have made me feel much less optimistic about the universality of one- size standards for all.

The idea of ​​qualifying for the Blessings works very well, unless you have a mental illness.

Standards of behavior can be helpful, and keeping the commandments really isn’t difficult – for those of us who aren’t mentally ill.

The “covenant path” is straight and narrow, and everyone should always stay there – but it is much more difficult if you are mentally ill.

And because we’ve won the mental health lottery and have no idea what it’s like to walk around with a sick brain, we tend to only see the presentation behavior of those who do. have not had that chance. We are free to judge when they can’t seem to control their sexuality or anger or impulsivity, failing to recognize these as classic symptoms of many mental health problems. These people! Why can’t they pull themselves together?

I did that too. For example, I was in my thirties before I could see that a family member with drug addiction was first mentally ill and then addicted to drugs, because he was trying everything he could to alleviate the pain in his life. trouble. It seems obvious to me now, but it was an aha moment – a moment that I had to remember over and over again as I slipped into judgment.

When we only see the behavior of people, we are missing out on a lot of the story.

The church has always placed great importance on correct behavior, so much so that our evangelical friends have sometimes accused us of believing in the “righteousness of works”. This is an oversimplification of what we believe about the interplay between faith and action, but it is certainly true that we believe that our choices have consequences, even eternal ones. But lately I have felt that we are focusing more on righteous behavior and certainly on the idea that God’s approval is conditional. The word “qualify” is used a lot these days in General Conference, as is the brand new buzzword “covenant path,” which was not mentioned once at the conference until. in the 21st century.

If we are serious about becoming more compassionate about mental illness, we must do the painful job of examining our assumptions about personal justice. It is essential to recognize that not everyone gets all the tools they need to make the decisions that we believe are fair and correct.

As I said, the playing field is not level. When we emphasize that the Lord cannot endure any unclean thing and that His acceptance of us is based on all of the dazzling feats of self-improvement that we are going to accomplish, we are not helping.

But when we realize how much mental illness hinders people’s ability to choose the right, we become more compassionate, more like Jesus.

Wide enough for the genetically unlucky, giving them a feast of bread, not pebbles.

The opinions expressed in this opinion piece do not necessarily reflect those of Religion News Service.