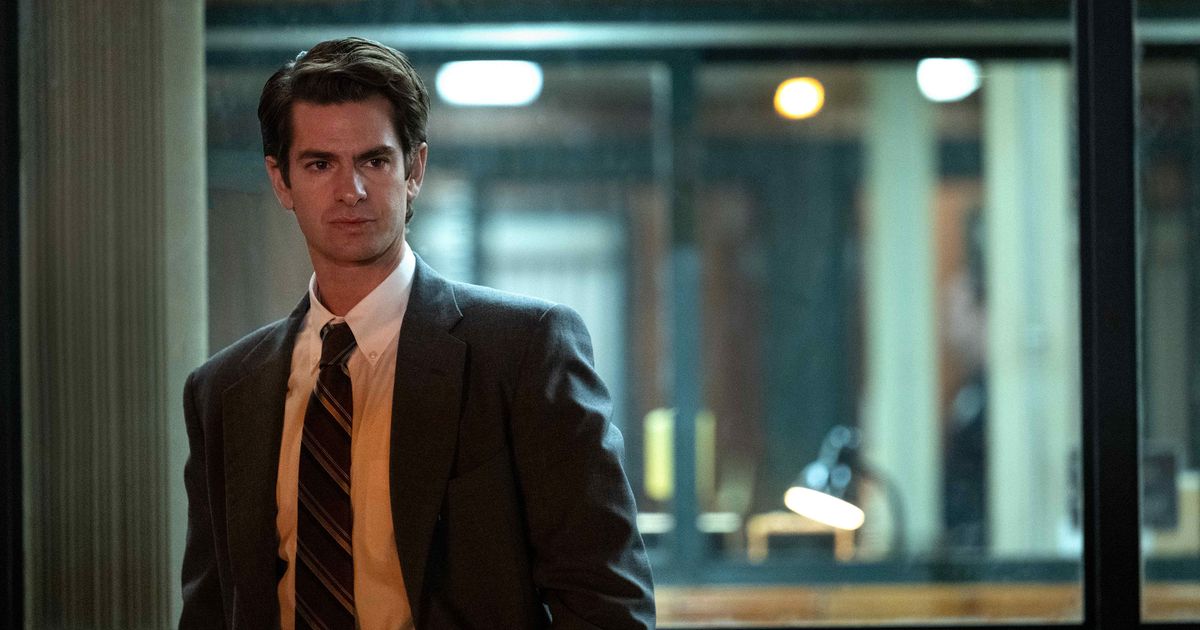 Based on Jon Krakauer’s 2003 book, Under the banner of heaven is the true story of a double murder in Utah in 1984, perpetrated by one of the many fundamentalist splinter groups of Mormonism, which is juxtaposed with the early days of frontier justice of the LDS Church. For your humble receiver, a deceased Mormon born and raised in Provo, Utah, this miniseries is sure to be an extended “TRIGGERED” meme, so let’s get to it, huh, brothers and sisters?

Right off the bat, the show hits you with the True detective-mid-ambient, opening with an ominous montage of the greater Salt Lake area (including a prominent shot of the LDS Temple in Provo, my old stomping grounds). We focus on Andrew Garfield’s Detective Jeb Pyre, a loyal Latter-day Saint and all-American family man who is sadly unprepared for the double murder he’s about to be called upon.

Dressed in a suit that’s equally suited to church and detective work, Pyre ends his nightly prayer with his wife, daughters and ailing mother with a poignant plea before heading to the crime scene: ” Heavenly Father, may we be instruments in your hands, and to help fix what we find broken, but what he finds is irreparable: the bodies of Brenda Lafferty (Daisy Edgar-Jones) and her 15-month-old daughter , Erica, with her throat slit and blood horribly pooling on their kitchen floor.Pyre emerges from the house to find Brenda’s husband, Allen Lafferty (Billy Howle), standing in the street covered in blood, and there it is. our mystery begins – real David Lynch-type shit, unfathomable darkness veiled behind a white picket fence and so on.

After Allen arrives, there is a bit of a hubbub at the police station. Anyone who knows he is a Lafferty is appalled, seeing how the Laffertys are a prominent Mormon family in the valley (“highly valued”). There is a version of a large, much-loved, multi-generational Mormon family in every neighborhood in Utah (“neighborhood” is the Mormon word for a local congregation), often holding some of the church’s “prestige” positions and managing a family business together. Large, entangled, “supporting” families remain an elite social currency in Mormon (e.g., wealthy, public families like the Romneys, Coveys, etc.). Either way, Allen claims that about a year ago “peculiar men” with beards were taken away with his family and they could still be in danger. Pyre’s partner Bill Taba (Gil Birmingham) — non-Mormon resident, Native American detective, and fish out of water, with the added burden of occasional community-wide racism to contend with — seems convinced, on the face of it, that Allen killed his wife. Pyre is less secure, competing with his own prejudices and familiarity with the Lafferty family. But they switch positions when it is revealed that Allen has fallen from the faith (Pyre catches him without the Mormon temple clothes as he changes out of his bloody clothes). Pyre becomes petulant, equating what he perceives as a loss of faith with a loss of morality (something I wish I could say I had never done as a Latter-day Saint), bursts into the room interrogation and begins quoting the LDS scriptures to Allen and throwing handcuffs on him. It’s the weirdest version of good-cop-bad-cop you’ve ever seen. “You have turned your back on our Heavenly Father,” Pyre said. “I’m confident forensics will have proven your guilt by tomorrow morning.”

But Allen Lafferty knelt with his wife in the temple and brought her to church with her family. “You think of them as signs of innocence,” Allen reminds him, “but they’re not.”

From there, we return to Brenda’s idyllic life before Allen in Idaho with her family, led by a bishop father who keeps the faith while supporting his daughters in all pursuits of their lives. Her family and moderately progressive approach to gender roles is by the way much more representative of your average modern LDS family, providing a much-needed contrast to the Laffertys, who we are introduced to when Brenda is brought to meet them for the first time. .

Immediately, the vibrations are unleashed. Like, we just saw this sweet girl tell her concerned parents that she’s going to Salt Lake City, a “big city with values,” to study broadcast journalism at BYU, and she’s going to be on television. Now she’s in Utah to meet her boyfriend’s LDS family, who work with creepy brothers and a crazy dad who’s stepped straight out of the 18th century to stand at the head of this Rockwellian nightmare of a table. to dine. Raw deal, man.

But I will say this: Brenda certainly gets the ground very quickly among the Lafferty clan. And even though, as Allen reports, everyone in her family was looking for fault with Brenda, she comes out the other side, seemingly undeterred from making a place for herself in the family. She also watches as her older brother Ron (Sam Worthington) is left behind in favor of his younger brother Dan (Wyatt Russell) to take over the family chiropractic business and household while her parents go on a mission for a couple of people. elderly for the church. Excellent casting with these two, by the way. The second Worthington and Russell came on screen, I thought to myself, Hey, I know these actors, and, Eesh, I know those guys, know what I mean? You see, Ron is on his own way, at least financially; he’s got his own fraudulent construction company and everything. “As much as they had their eyes on her…she had their eyes on us,” Allen says.

Back in the “present”, Pyre asks Allen if he misses going to church. Yes, he says, but what he misses most are the days when he believed God was love. It was love, after all, that moved Joseph Smith to create his one true church. “With their love,” Allen said, “God would share hidden truths.” It is the church that he misses, and what replaces it is a faith that breeds dangerous men, as he will say later.

On the investigative front, Detective Taba drives to Allen’s brother Robin’s address, finding an abandoned house and a bonfire of documents burning in the backyard. This piques their suspicion on Allen, who still swears bearded men have infiltrated and corrupted his family and every second they spend focused on him is a second another man of God is inspired to shed more blood. That night, they receive a call from a hotel manager with eyes on a suspicious man with a beard, matching the APB description he heard on his police scanner. It turns out to be Robin Lafferty, the next key witness in this unfolding mystery. “What if evil finds its way here?” Pyre wonders. “What if tonight was just the first edge of a bone that was finally emerging from our own desert soil?”

• Damn, the TV made my ass look like an ex-Mormon. the pachino meme. Just when I thought I had distanced myself from (and accepted) my old religion, television decided to have its own mini “Mormon moment.” I just finished recap Deputy Tokyoa show where my favorite character happened to be a Mormon elder, and I happened to catch up on Pamela Adlon’s final season better things, where the great Angela Kinsey starred as a deceased Mormon from Utah with a son named Brigham (LOL). And now FX is spinning Under the banner of heaven. So when the opportunity arose to recap this show, I wasn’t about to question it; weather is a flat circle and all that. It’s better to take these things as they come, lean in and answer the call, and see what nuggets of revelation come to the surface.

• I haven’t read the book, but from what I understand of Krakauer’s dual-narrative approach, the idea was to connect these modern murders to a tradition of violence, border justice and repression of the patriarchy that continues to spread from Mormonism. point of origin in countless ways. In recapping this show, it could be very easy for me to get lost in the weeds, pointing out every little difference or inaccuracy I might see in every dialogue, shot, costume design, etc. But setting aside the fact that, from what I’ve seen so far, this show is pretty darn accurate in its depiction of the larger Mormon world, I’m much more interested in tracking the underlying truths. about Mormonism (and America, for that matter) emerging from the series at face value. In other words, we’re not watching a documentary here.

• Garfield immediately emerges as the perfect fit for a character like this, exuding a comforting movie star familiarity to audiences while embodying the earnestness, poised innocence and genuine sense of duty that define Mormon man modern. His previous experience playing a man of faith plagued by overwhelming doubt in Martin Scorsese Silence is sure to come in handy in this joint.

• A note on the real detective comparison: this really only goes superficially, whether you see it as a sales pitch or a criticism. In terms of composition, there is definitely a generic brand real detective the style passes, but I don’t think it’s that hard to be an HBO show or anything. Sure, there’s the small town, generational black cult stuff, but it’s also a true crime story, not a lyrical genre story, so its concerns are necessarily different.

Catch all the drama from your favorite shows!

By submitting your email, you agree to our terms and Privacy Notice and to receive e-mail correspondence from us.